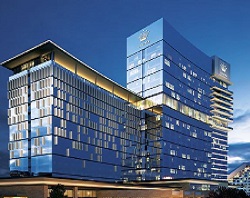 Within the first 12 months of operation, Crown Towers has definitively made its mark as the pinnacle of luxury in the West Australian market – receiving some of the most prestigious awards of the evening including:
• Deluxe Accommodation Award
• Management Team of the Year Award
• Best Accommodation Hotel Award
• Front Office Award – Emma Lang

“Winning these awards shows that Crown Towers has not only changed the luxury landscape on the West Coast – but has definitively set new levels of accommodation excellence and service right across Australia,” says Cairns. “Australia’s best hotel demands the brightest and most passionate staff. We are immensely proud of our team and the contribution they are making to ensure Crown Towers is one of the world’s greatest hotels and our State remains a vibrant tourism destination”.

The AHA Hotel Accommodation Awards is a national awards program and the State event is one of the top 10 events in Western Australia. Winners from each state will now go on to the AHA National Awards for Excellence held in the Gold Coast on Monday 18 September.